Utrecht has an extensive public transport network. Bikes are not allowed on the bus or tram. Luckily the tourist highlights are within cycling distance. You can use the train to get to and from Utrecht with your bike. 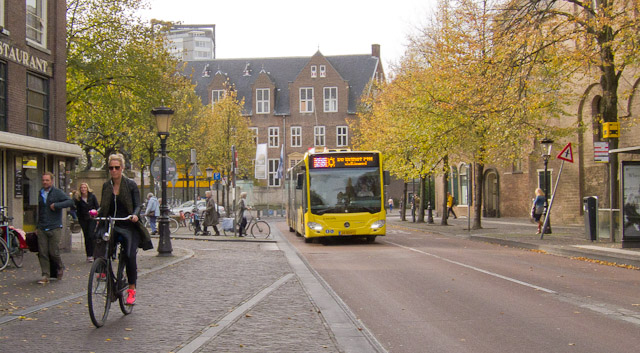 The train is an excellent way of getting to and from Utrecht with your bike. There are regular train services from Utrecht to destinations all over the country. There is also a late night service between Utrecht and Amsterdam, Amsterdam City Airport, Leiden,  Rotterdam and The Hague.

Taking your bicycle on the train

You are allowed take your bicycle on Dutch national trains outside rush hour. The prohibited times are between 6.30 and 9 a.m. and between 4.30 and 6 p.m. on workdays. This restriction does not apply in the weekend, on national holidays or in July and August.

You will need to purchase a special Bicycle Day Ticket. Folding bikes - as long as they are folded - are considered luggage and can be taken free of charge any time of the day.

If you don't bring your own bike, you can rent a bike at most train stations. This is why the train is such a popular way for Dutch cyclists to get to the starting point of a route and why our day trips usually start at a train station.

For more info, go to our bike rental page.

We'd love to hear what you have to say. Please leave a message in our guest book.

Give us a hand - help us maintain this site. Please give your feedback or make a donation.